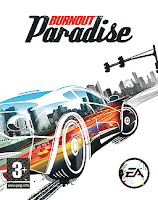 I know that the point of blogging is to present opinions, but sometimes you just have to say, "I don't know what to make of that." For instance, did you know that singer/songwriter Tori Amos was initially approached to take the role of the female lead in George Lucas' awful Howard the Duck movie? No? And... it's kind of hard to know what, exactly, that goes to show.

That's the case with Burnout Paradise. I can't say it's not terrible, because it is. It's absolutely terrible. But I can't say it's not brilliant. Because it's got brilliant coming out of the seams. It's a horrible mistake and a wonderful success and an abortion and a revelation all in one. And you'd think that that should in some way elevate it to the magical heights of Gaming Olympus alongside such balls-out conceptual apocalypses as Metal Gear Solid and Mirror's Edge - but it can't even make its mind up on that and resolves instead to be enjoyable without ever being breathtaking.

The Burnout franchise is a simple thing. You drive a car; the car goes very fast, and often it crashes. The crashes are detailed, epic, and almost pornographic - if lovingly rendered shots of twisted metal are what turns you on. Crashing isn't a punishment for failure as it would be in some games; it's where the game begins, lives, sires children, and dies. You crash, your flailing wreckage takes out a bunch of your rivals, and then you're teleported back to the road with a rolling start, ready to wreak some more carnage.

So Burnout Paradise has the basics in place. There's cars, and there's fast, and there's crashing. The difference from previous installments is the context. Where Burnout Takedown and Revenge (and the apallingly bad Dominator) had presented the gameplay as a series of isolated events, Paradise smushes it all together into a single fully-explorable city scattered with car-oriented things to do. And then makes it all... online.

A persistent multiplayer sandbox themed around the concept of high-speed metal smashing violently into hard objects? Let me ask you this: where do I sign up? Right? What is there not to love? And to a large extent that's not sarcastic. The driving action is solid, there's a heap to do, and the transition between online and offline play is orgasmically simple and sleekly elegant.

There's a problem, though, and it might be apparent from what the developers had to say about Paradise. Said Alex Ward, the game's creative director, "To create truly next-generation gameplay, we needed to create a truly next-generation game from the ground up." It's refreshing to know they were working from the ground up, rather than from left to right or inside to out (those are common beginner mistakes), but I challenge you to find a part of that sentence that isn't composed of buzzwords and cliches. What happened to, "To create fun, exciting gameplay, we needed to come up with solid concepts and then playtest the crap out of them"?

The most egregious sin is the complete castration of the crashing mechanics. Ability to steer your wrecked car into competitors? Gone. Ability to detonate your wreck to nuke nearby rivals? Gone. Much loved Crashbreaker mode, wherein you're challenged to score maximum property damage in a single epic multi-vehicular pileup? Gone - or, more accurately, transfigured into a decent but rather brain-dead mode called Showtime, wherein we learn that a wrecked car cartwheeling down a highway for upwards of ten minutes actually can be more than a little dull.

Another problem is the assymetrical layout of the map. In designing Paradise City, effort was made to include all the classic Burnout locales - beach, highway, countryside, downtown, and mountains - but the result is a map dense with detail on the eastern (city) side and packed with long stretches of nothing on the western (mountainous) side. All events in Paradise City have their finish line at one of the eight cardinal directions of the map, so when a race leaves you washed up at the Observatory in the north-west or the Wind Farm in the West, it's often a long drive eastwards before you can find anything worth doing.

While we're on the map - the serpent in this particular paradise - it's hard to picture the designers sitting around and saying to each other, "I think we can all agree, there's nothing that spices up high-speed racing like pausing the game to see whether you should take the first left or the second." I'm not sure what kind of a brain-spasm led to making "navigating" a part of the basic gameplay of Burnout but it's about as welcome as a feminist at a pro-wrestling match. When you lose events - as you will, frequently - you'll find that although about 10% of the time it's legitimately due to your poor driving, the other 90% of your frustrations will be missing turn-offs, taking sub-par routes, and accidentally driving into "short-cuts" that exit onto different roads going in wildly different directions.

The last of the conceptual problems with the game is the Smashes and Crashes. Throughout the city, giant red billboards and tiny yellow fences are set up. Each time you blast through one, the game gleefully informs you you've collected another Smash (or Crash), and when you hit these things while barrelling down a previously unexplored back-road at 100 miles per hour it's the perfect embodiment of high-speed craziness.

Unfortunately, there's 120 billboards and 400 barricades and you're encouraged to "catch 'em all". Once you're down to your last couple of dozen it's a process of spotting one from a distance, stopping your car, and then slowly circling the block working out how to get to it. The game helpfully tells you which parts of the city the missing collectables are in, but that doesn't change the fact that verbs like "stopping", "reversing" and "driving slowly" are pretty much antithetical to all that Burnout traditionally holds dear.

All of those complaints aside - and they're sizeable complaints - there's still a very solid game under the hood here. Events like "Road Rage" and "Marked Man", that involve violently shoving other cars off the road (or resisting their attempts to return the favour) are brutal, adrenaline-fuelled fun. Anything that launches your car into the air is excellent, whether or not you end up landing safely. There's over 75 vehicles to collect, and each one feels unique and identifiable. The soundtrack's reasonably okay, although the decision to make "Paradise City" play over each and every iteration of the game's endless opening menus is pretty damn inexcusable. And the truckload of free patches and downloadable content that the developers showered the game with long after its release is just this side of Valve's gold standard in ongoing support for middle-of-the-road games.

Two elements particularly stand out as genius. One is relatively simple, which is the Road Rules conceit. Any time you start driving down one of the game's many, many streets, a little timer starts running. You can totally ignore it, or you can floor the accelerator in the hopes of setting a new speed record (or "Road Rule") down that length of road. Your records are stored online and can be compared against the game's par times or the best times of yourself and the people on your friends list. The leaderboards are seamlessly integrated, showing you your friend's best time for whatever road you're currently driving along with a selection of other speed records via a constant text crawl at the bottom of the screen. It's a brilliant, "Care about this, or not," stratagem that makes the long drives back and forth between start and finish lines a lot more bearable.

The other is the online. An in-game interface keyed to the d-pad lets you find multiplayer sessions while driving, and when you enter them you do so without any transition - you're still in the same car with the same velocity on the same stretch of road, only now there's other players. The game tracks heaps of stats about other players and isn't afraid to share them with you in a variety of ways - most prominently through temporarily updating your local leaderboards to include the people you're playing against, but also through pump text at the start of races where your rivals' intimidating takedown and win/loss records are handed out with the enthusiasm of a professional sports promoter. The host can initiate races and other events that automatically gather up everyone in the session, or they can declare one of about 500 "freeburn challenges" which ask players to accumulate a total amount of airtime between them, or all perform a particular jump, or all meet in some ludicrous location like "the top of the waterworks". They range from trivially easy to epically hard and data on what to do, how to do it, and how close you are is well presented and engaging. Or of course you could drive around and smash into each other. That's fine too.

In the end Burnout Paradise is less about the cinematic road violence of previous entries in the franchise, and more about capturing the spirit of all those children who liked to take two toy cars and ram them into each other. It's a sandbox in the truest sense of the word, where the developers have given you moving parts and challenged you to find your own fun. It's a dismal failure as a Burnout game but a raging success as an accessible, understandable experiment in social play. It seems to keep getting $10 cheaper every three months so pretty soon it'll be basically free, which leaves you with no good reason not to check out a copy, I guess. And, y'know, try and beat my times.
Posted by Greg Tannahill at 10:00 pm 5 comments: