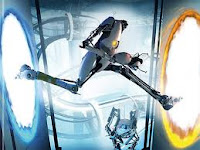 Here is a truth: that less, quite often, is more.

I mean, how do you write about a pretty darn okay game? How do you do that?

It's easy to write about good games. You set the relevant knobs to "effusive", dig out your box of superlatives, and try and pretend that the entirety of human existence was nary but a prelude to this moment.

And bad games write themselves. You anthropomorphise them, so that one cloven foot is brutally kicking puppies and one malformed paw is enthusiastically saluting Hitler and everything in between is modelled after the style of a particularly unintelligent professional footballer. This is called journalism, and I have heard that in some uncultured backwaters they pay you for it.

But what about the also-rans? Where in the dark night of hyperbole is there room for a star to shine only dimly?

So the critical consensus was that Portal - the original, this is - was frikkin' awesome. I think we are agreed on that. We took a census, or something. And I think we are also agreed that we love it so much that if creators Valve were to come along and leave something on our doorstep - some orphaned and unloved child - that they had chosen to call Portal 2, we would take that child into our home and try to pretend we loved it as much as our other progeny. I think we are on common ground here.

But is Portal 2 really any good? Can it measure up to its older sibling? Do we lovingly hug it each night and sit with it as it falls asleep, or do we just kind of wave at it from the doorway while waiting for this week's episode of Community to download? These are the questions that occupy sentient minds in the lonely hours, and they are questions that demand answers.

Well, Portal 2 is an awkward child. For one thing it's fatter than the original, and for another thing it's lazier. Thirdly, I'm running out of steam on this whole kid-based metaphor so let's abandon it and cut straight to the chase. Portal 2 is a good game, but it's not a great game, and the reason why is that we already played the original Portal, and we didn't need more.

Portal had three killer ideas. One: the portal gun. Two: GLADOS. Three: the design aesthetic. That's what we're here for. Geometric white rooms that we can portal across to give GLADOS the finger.

Portal 2 has two great additions: Stephen Merchant as the voice of a dimwitted AI, and a thing called Conversion Gel. Oh, there are other newcomers, but they're not great. They're just there. They're window dressing to distract you from the central truth that 70% of Portal 2 consists of repetitive busywork to keep you occupied while the voice actors regurgitate their dialogue.

It is, to be fair, good dialogue. GLADOS and her turrets are now supported by a whole range of new characters, both major and minor, and pretty much everything they utter is gold. That's the game, right there, and it's the chief reason that the thing is easily recommendable to just about anyone. You're going to love both the script and the delivery.

But the gameplay falls into two categories: repetitive, and iterative. Either you're doing something you've done before, or you're doing something that's similar to something you've done before. You can combine these two words into one new word called "repetetiterative" but there's no good reason to do so. Repetetiteration is great if you're training someone to learn a task, but when you're following a title as revolutionary as Portal it's disappointing that nobody thunk up anything as clever as the actual portals themselves. The bridges, tunnels and gels that the game dispenses are all variations on puzzle-genre staples, and the portal-enabled twists on them are either trivial or under-explored.

The standout is the Conversion Gel. It's a sticky white paint that gets pumped out of big Mario-style plumbing tubes. Anything it touches becomes a surface which supports portals. This would have been redundant in the first game, but what's new in Portal 2 is that it hoards portalable surfaces like a conservative politician hoards public school funding, only dispensing the goodies when compelled by the combination of absolute necessity and outraged parents demanding to know why their children are getting IT training on a BBC Acorn. Normally in Portal 2 the rooms are made of rusting brown portal-averse metal, with only the occasional frosting of white portal-friendly wallpaper. And yes, often this makes the solutions blindingly obvious - just put the portals on the only place they can possibly go.

And then, of course, you hardly ever see the damn stuff again. So that was nice while it was there, I guess.

This is the dark side of Valve's famous iterative playtesting process. When they get every build of the game played again and again under controlled conditions, yes, it it lets them polish the experience until it shines. But at the same time it can feel like the player has been koshed in a dark alley and had all their "agency" and "free will" stolen by thieves and blaggards. Portal 2 feels very much like one of its new innovations - the "edgeless safety cube" (a ball).

Here is the thing: Valve already made a perfect game about portals. It was called Portal. There was not a single thing in that game to fault. It was flawless. How do you improve on that? How do you expand on that? You can't. A delicious chicken carbonara doesn't look any tastier when you wallpaper your entire house with it.

Portal 2 is good. Portal 2 is very good. But given its antecedents, very good isn't enough to stop it being disappointing.

Less, quite often, is more.
Posted by Greg Tannahill at 1:12 pm 5 comments:

This is a nitpick. Let's get that straight. Heavy Rain is an excellent game and everyone should play it.

After all, to really bitch about a game, you have to love it first.

So with that in mind, here is the thing: for a mystery game, Heavy Rain is awful light on the mystery.

I don't mean the big mystery, of course. The game wants you to wonder who the Origami Killer is, and you do wonder, despite the obvious freaking clues pointing at him with giant metaphorical neon arrows, mostly because the game actively doesn't just mislead you but rather actively lies about key events.

But it is a big mystery. It's a mystery that gets introduced about five scenes in and isn't resolved until the final act. Everything in between involves gathering clues, and talking to suspects, and (in the case of journalist Madison) being threatened with rape on three separate occasions. There's car chases and fistfights and a nasty bit of business involving a choice of surgical implements, but you don't resolve that central mystery, or even any subset of it, until right at the end, even on a perfect playthrough.

So what's keeping the player going? Where's the payoff? Scene after scene goes by with no questions answered. I can only speak for myself, but I found it exhausting. After you quicktime your way through your third desperate knife battle in as many conversations, and find yourself still with no new information, you're a long way from being in the coveted "just one more level" zone of addictive play.

And the questions are there. What's the deal with the cop's addictions? I don't know. The game doesn't explain. Why can't Madison sleep? What's the significance of the killer's poem? Heavy Rain throws these issues out there, and even has them drive plot points, but then seems to forget about them, or at least think that explanations aren't necessary. Properly handled, these could have given the game the sense of structure that occasionally feels missing. They could at least have turned the grim march towards the endgame into something that felt less like a joyless descent into failure.

Heavy Rain is a huge improvement on Fahrenheit, the last game from David Cage and his team at Quantic Dream. But it's still got a way to go in learning to tell a satisfying story. I'm looking forward to their next attempt. Will they continue to improve? Really, that's the mystery that's keeping me engaged here.
Posted by Greg Tannahill at 12:46 pm 2 comments: