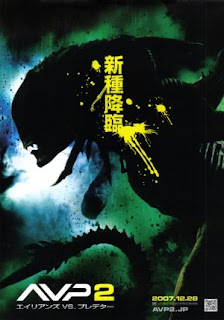 It seems that everyone wants to be Johnny Depp these days, so it’s no surprise that in Aliens vs Predator Requiem the titular Predator is doing its bow-legged finger-wiggling best impression of Captain Jack Sparrow through scene after tedious scene. It matches up firmly with the movie’s Aliens, who don’t quite seem to have gotten the hang of the “killing humans” idea, and instead interact with their victims largely by looming over them, running around them in circles, licking them, and stroking their pretty, pretty hair. The concept of Aliens vs Predator is inherently a fine one, but the “versus” part really implies that the competition in question is going to be the combative sort, rather than some kind of all-comers no-holds-barred parade of camp.

For the most part AVP Requiem is pretty much interchangeable with Michael Bay’s recent Transformers-esque movie, where you can swap the characters, action, and dialogue back and forth with no significant loss of quality. It feels very much like the AVP licence was obtained at a late stage and the off-world lifeforms in question were shoehorned into what was originally intended to be a run-of-the-mill zombie outing. Shotguns, sheriffs and cheerleaders are the go, and it’s the sort of movie that has an unhealthy obsession with town squares and truck-stop diners.

This time around it appears that those dastardly Predators were getting up to what might be referred to as “science” with everyone’s favourite aliens, creating one of those Predator-Alien hybrids that franchise fans lovingly refer to as a “Predalien”. Naturally, things go awry, and the science vessel on which all this malarkey is taking place crash-lands on Earth, discharging face-huggers and Predalien alike into the Colorado wilderness. Soon the wee beasties come across a townful of unsuspecting humans, and hilarity ensues. One lone Predator from what I choose to refer to as “Predator Planet” somehow is informed of the goings-on and travels to Earth with the never-quite-explicitly-explained motive of hunting him down some Aliens.

It’s all just an excuse for a chest-bursting acid-flinging head-biting gorefest, and not in the good way. The movie repeatedly dives into some internal ocean of tedium and comes up dripping wet; it’s one of those flicks that’ll leave you consulting your watch and wondering how much longer it can possibly take for them to get around to nuking the site from orbit.

On the plus side, the Predator himself is mostly handled well. You’ll see the full array of Predator weaponry used to passably good effect, and for those who’ve played the wonderful and deeply underappreciated Aliens vs Predator 2 game, you’ll likely be wanting to dig up a copy and reimmerse yourself in that classic title. It certainly beats sitting through the quasi-cinematic nonsense on offer here.

There’s the usual gallery of awful directorial decisions, ranging from shaky camerawork to sub-par lighting and plot points that repeatedly insult the intelligence of five-year-olds, but really the movie’s greatest sin is that it completely fails to hit any of what make the AVP franchise such a wonderful piece of fanwank. Marines, people. Marines. It needs jarheads with guns, on a desolate world, falling in love with the mythos of both Aliens and Predators for the first time all over again.

If you’re wondering what the “Requiem” bit of the title was all about, you’ll be happy to know that it’s just an effort to make the film sound more pretentious than it otherwise might. The movie trudges the length of its narrative wasteland without ever once sighting what might possibly be a requiem in the extreme distance. It’s like the antithesis of the school of movie-naming which produced Snakes On A Plane.

Really, it doesn’t matter whether or not you’re a fan of Alien, or Predator, or the Alien vs Predator franchise. You may have enjoyed the AVP books, or comics, or videogames, or you may or may not have some particular opinion about the last AVP movie. It doesn’t matter – this is a mind-numbingly dull movie that won’t be of interest even to fans who stay up late at night salivating over mind-numbingly dull movies. Let us never speak of it again.
Posted by Greg Tannahill at 9:27 am