Starcraft: The Board Game 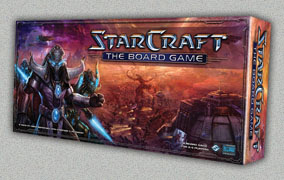 With your desire for steamy Zerg/Protoss slash fiction whetted to a keen edge by the forthcoming release of StarCraft 2, you may have found yourself in your local game retailer, face to face with one of the cyclopean boxed sets of the associated board game and quietly exclaiming, "My God, it's full of stars."

A mere $160 AUD will make you the proud possessor of StarCraft: The Board Game, and in the interests of the enlightenment of my fellow man I've made the necessary sacrifice to acquire myself this oversized item of merchandising.

Carrying the thing is a bit of an enterprise in itself. I’ve seen ten year old children that are smaller than the box this thing comes in. By the time you lug it back your domicile or place of abode you’ll be wheezing so hard that you'll barely be able to make humerous references to spawning more Overlords. It’s entirely possible that your last words before keeling over from a massive coronary will be “Left heart ventricle... requires more... vespene gas!”

The perpetrators of the boardgame, by the way, are Fantasy Flight Games, who by and large have an excellent history with licensed boardgames. Their War of the Ring remains one of the finest strategy games I have ever played and comes highly recommended. So it’s a bit odd that Starcraft: The Board Game comes across more or less as a mish-mash of reasonably original ideas with no clear focus or genius. It’s deeply hit and miss, and while fortunately the hits outstrip the misses, the sheer quantity of glaringly obvious game design errors it makes is sufficient to induce epilepsy in small children.

It’s got a lot of pieces. It’s got a LOT of pieces. If you’ve dealt with one of FFG’s previous licensed efforts you might have an idea of what you’re in for, but Starcraft still completely outstrips even the massively epic War of the Ring for quantum of ridiculous minutiae. Each of six players will get a double handful of plastic miniatures, a deck of 40 odd cards, 15 cardboard worker tokens, a score marker, cardboard bases, cardboard buildings, cardboard modules, cardboard dropships, and cardboard order markers, and that’s before we get into the shared card decks, giant cardboard planets, space connectors, z-axis markers, first player tokens, score tracks, rulebooks and other detritus that FFG have shoved into the box.

There’s actually too much in the box. Literally. Some of my plastic pieces came pre-broken, because they’re quite delicate pieces, and to fit them in the box they needed to be jammed in there by (I presume) some kind of piston-driven robot. The flying pieces in particular have ridiculously fragile stands that they sit on, and a great number of them were snapped like the flimsy mass-produced pap that they are.

The surviving pieces look pretty great, though. Hydralisks and Dragoons look notably wonderful, and the Ultralisk model is almost worth having all by itself. Pushing them around the board is exactly the sort of fun that makes you want to pay $160 in order to have it.

The game gets off to a promising start by not attempting to perfectly recreate its computer-powered parent. Instead of fighting intricate battles planetside, you’ll instead be looking at things from a galactic perspective, and attempting to take territory on a variety of different colonies.

The board is created dynamically by linking together planets to form a map in a manner reminiscent of something like Settlers of Catan. There are six different factions to choose from; as Terrans you can play Jim Raynor or Arcturus Mengsk. The Zerg get Kerrigan or the Overmind. Protoss are stuck with choosing between Tassadar or Aldaris. Each race gets a couple of reasonably interesting special rules, and each faction of each race gets a slightly different starting setup.

You win by achieving either a normal victory or a special victory. A normal victory is achieved by reaching a certain number of conquest points, which are gained by holding key territories at the end of a turn. Special victories are different for each faction, and this is probably the biggest problem with the game, in that some factions have special victory conditions which are just flat-out better than others. Tassadar in particular is incredibly cheap, requiring him merely to be in the lead at any time during the endgame in order to win. We’ve played about five games now and we’re talking next time about removing special victories entirely before we’re forced into fisticuffs over who gets to be Tassadar.

The best aspect of the game is probably how orders work. You have three types of orders, being build, research, and move, and in one round you’ll lay down a combination of four of these orders around the board. Where it gets tricky is that each order has to be assigned to a planet. Orders on a planet stack, so that when you place an order it sits on top of all orders already assigned to a planet. Also, orders are executed in a last-in-first-out manner, so that you have to plan backwards by placing the things that you want to do last down before the things you want to do first. What’s more, players take turns placing orders, so that your orders can get buried beneath someone else’s, so that the build order you desperately need won’t get executed until the jerk to the left has used his move order to attack you. It’s a wonderfully deep tactical exercise that’s responsible for the majority of the game’s success.

The game does reasonably well at stopping itself from focusing exclusively on an optimal first economic turn. Very tight unit limits and a reasonably flexible build system mean that a subpar opening does not necessarily lose you the game.

The game’s second major weakness, after victory conditions, comes from the way it handles technology. To research a technology, you have to spend a research action. You then must pay the cost of the technology. Technologies come in the form of cards that are placed into a deck of combat cards which you use to resolve battles. As technologies are only effective on at most a couple of types of unit, you’ll only want to research technologies for units you’re actually using, or risk diluting the power of your combat deck. What’s more, a large number of the technologies are just bad, requiring very specific scenarios in order to be effective or providing little advantage.

Some units (notably detectors and support units) are completely unable to do anything until you’ve bought them technologies. This doesn’t mean you’ll by them technologies – it means you’ll ignore the units. I’ve yet to build a Zerg Defiler or Zerg Queen, and I haven’t seen anyone bust loose a Templar or a Science Vessel yet either. The game seems to contemplate an ongoing cloaking vs detection metagame that never really emerges, largely because cloaking is not really useful even when there’s no detectors about.

Still, if you’re prepared to slice off large sections of the game as not worth your time, what remains is pretty decent. The three races seem reasonably balanced once you discard the special victory conditions, and there’s no doubt that what you’re playing is recognisably Starcraft.

One thing that seems a bit cheap is that there’s none of the characters or units from Brood War present; it’s a move that seems calculated entirely for the purpose of selling an expansion, and it’s just coldly commercial enough to feel annoying. Still, you’ll forgive the game’s makers each and every time you build an Ultralisk; deploying your top end units is just that satisfying.

The game works best with about four players, although the two player variant is not entirely without charm. Games go for about two hours at the four player size (once you’ve already sorted the pieces and learned the rules) and the rules are clear and require little interpretation. The game looks and feels gorgeous and it’s not hard to see where your money went once you examine the cornucopia of full-colour crap inside the box. It’s just a shame that the tech cards and the special victory conditions are so obviously and deeply rubbish.

Is the game worth $160? Probably not, unless you have a lot of friends who are going to want to play a lot of this game. If you’ve got the crowd, however, Starcraft: The Board Game might well be worth the investment.

Edit 14 January 2008: It turns out we've been playing one of the rules a little wrong, so in light of us now understanding it, I should say that Special Victory Conditions are not quite so extremely unbalanced as depicted above. They're still unbalanced, and the tech tree is still broken, but it's just a little bit better than we had thought.
Posted by Greg Tannahill at 7:05 am

I strongly disagree with your comment that the victory conditions are unbalanced. I also don't see any problems with the tech.

This is a "short" game. It goes for 4-6 rounds. You can't research everything. You can't build every unit you want to. You can't accomplish everything you want to do before the game ends. You need to focus on one thing and do it well.

I find the game length (timewise and turnwise) to be right on the mark. The special victory conditions seem to be possible the turn right before the normal victory would be possible. This makes for an interesting game instead of everyone just going for the victory points.

Some may feel squeamish about eating it, but rabbit has a fan base that grows as cooks discover how easy they are to raise — and how good the meat tastes.