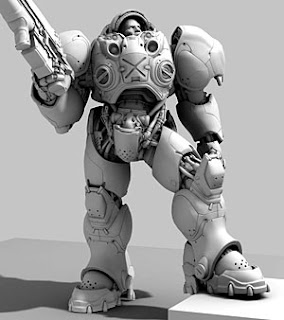 What happened to the cinematic? What happened to finally blasting through some controller-destroying boss fight and being rewarded with a chunk of the finest computer-animated cinema that money could buy? When did it become acceptable to just render things in the game engine, no matter how shonky or poorly animated said engine might be?

Yet another trailer for Grand Theft Auto IV has been doing the rounds, and putting aside how increasingly unexcited I am about this franchise serving me another giant sized helping of more of the same, the trailer on its own merits falls considerably short of amazing. Line after line of cliché-ridden Russian-accented mobtalk is being delivered by in-game character models with significantly less expressive range than a sock puppet. It’s never been clearer that when the only body language you’re capable of delivering is a firmly upthrust middle finger, there’s a whole range of dramatic possibilities you’re just not competent to explore.

I’m an unabashed fan of the cinematic. I happily bought the Blizzard DVD that has all the Starcraft footage back to back. I used to sit there and watch the second act epilogue in Diablo 2 again and again. I can describe the entirety of The 7th Guest as “thoroughly entertaining” and keep a straight face.

Good cinematics can conceal any number of gameplay faults. Look, for instance, at Dragon’s Lair. I dare you to walk near an arcade stand of that machine and not put in whatever ridiculous fee it wants to charge you for a game. Decades on, and people are still being suckered into experiencing its almost complete lack of interactivity.

Cinematics can be so important, indeed, that if you get a well known director to film 90 to 180 minutes of cinematic with well known actors, you can screen it in a theatre and not a single person will complain that it didn’t have an online component and the multiplayer was weak.

I think this was a lot of the reason I felt let down by Warcraft 3. It started off with these gorgeous films of beautifully rendered orcs smacking the living crap out of armoured knights, and then you get into the actual game and you’re being emoted at by what are effectively low-polygon plastic soldiers. That, and the plot, script, and gameplay were rubbish.

I firmly exhort the A-list developers of the world to not let the cinematic fall by the wayside. Spare me from another meandering rant through the games of my misspent youth, and put in the hard yards to deliver a quality multimedia experience. After all, you’ll appreciate it next time I’m comparing your game to a trip to Auschwitz but stop to add, “but, much like the Nazi propaganda machine, it has top notch cinematics.”
Posted by Greg Tannahill at 9:16 am

I'd rather see game designers work on telling their story without cut scenes at all.

That's of course by far the better point, which my post skirts with tongue more or less in cheek. And diving into Eternal Sonata may or may not inspire some observations on how its story is almost totally disconnected from its gameplay; there should be waiting and seeing, methinks.

The cynic in me says they quit doing the in-game cinematics because it's cheaper to render cinematics with the game engine.

I'm not against using the game engine for cinematics if it is up to the job. Indeed I can make a good case for why its appropriate. Sometimes though, it's not appropriate.

I absolutely loved the intro movie for Soul Edge, but there is no way the PSX could render that kind of cinematic using the Soul Edge engine. It just wasn't possible. I think in-game cinematics existed to help tell the story in a way that game engines were too limited to tell. Now that we have the technology, I suspect we see them going away because developers believe non-game engine rendering of important scenes is no longer necessary.

Frankly, just because you don't use the same tool in the toolbox all the time doesn't make it worthless.

I think there's a difference between cutscenes used to advance the story and cutscenes used as a sort of reward for accomplishing something or beating the game. The best example of this is the Final Fantasy games. When the scene is conveying a somewhat mundane event like people in a room planning their next move or an old man giving you a quest, everything is rendered in game. But when you beat the game or when some other really major event like a character death occurs, it's rendered in state of the art CGI.

And I think it's also worth noting that the CG cinematic isn't totally dead. They were used extensively in the God of War games. I guess it's really a question of how epic the designers want you to feel when playing the game. Warcraft III had its moments, but it's pretty clear that you aren't meant to take the whole thing very seriously either. The orcs practically sound like parodies of themselves even when you don't click their units repeatedly.

P.S. Grand Theft Auto has always left me cold, and the latest iteration has gotten me even less excited. I think part of it is because the music in the trailers is quite awful. It sometimes sounds like MIDI!