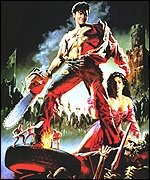 Initial reports suggest it's actually a prety good show, with songs including "Cabin In The Woods" and "What The F*** Was That?". This had better find its way down under, or I'll be getting out my boomstick.
Posted by Greg Tannahill at 1:20 pm

Sweet Jebus. I have so many questions I don't know where to start.

Who is playing Ash? Will it still have the infamous "getting a root" scene? What does Sam Raimi, Rob Tapert and Bruce Campbell think of this?

You'll have to use the magic of the internet to answer those questions, other than that I hear anecdotally that the person playing Ash does a fairly good Bruce Campbell. I assume it's licensed and so forth from those who own the rights, or it wouldn't be getting press in Empire.